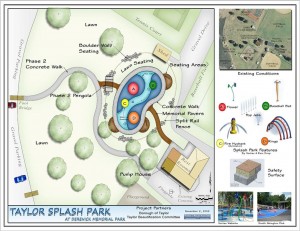 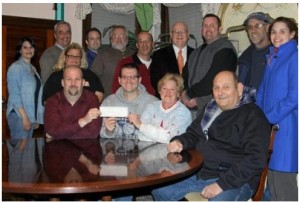 What started a few years ago as a passing “what if,” in the mind of one Taylor resident as she sat watching her grandchild play in an Abington-area splash park, has materialized into to a momentous fundraising effort, with a reach that has extended some 2,000 miles, and garnered a total so far of $37,500.00 in donations.

Peg Derenick, one of the founding members of the Taylor Splash Park Committee, and that “daydreaming grandmother” who has led a team of volunteers from Taylor Borough dedicated to creating a free place for children to come and cool off in the summer, could barely contain her excitement when news arrived last year that another member of the group — Jody Oustrich — had been working behind the scenes to secure a $5,000 donation via his brother Ryan’s employer, Vivant.

Vivant, which has more than 800,000 customers across the US and Canada, made the donation via its “Vivant Gives Back Foundation.”

According to the company, Vivant Gives Back donated more than $4 million dollars and 10,999 hours of community service to more than 100 non-profit organizations thought the US and Canada.

Ryan, a Riverside graduate who currently resides near Provo, Utah, first learned of the project while visiting family in Taylor. After his company superiors learned of the planned project, Vivant presented the donation on his behalf.

Additionally, the committee has been working diligently for the just over a year to raise the necessary fund to construct the proposed splash park without using taxpayer funds. Their efforts have included baked sales, breakfast with Santa, breakfast with the bunny, daily number lottery sales and a silly string day at Riverside Elementary East.

The committee has also received help from individuals and businesses.

Currently, members of the committee are actively seeking grants through the state Department of Conservation and Natural Resources, that would also provide matching funds to the committees fundraising efforts. They are also submitting for other grants to include the Lackawanna County Community Reinvest Program.

Although the estimated cost of the splash park is $275,000 it is a three year project, with project completion estimated in 2015.

And while it may seem that they have a long way to go in order to reach their goal, Derenick is every bit excited today as she was when the committee’s bank rolls where much less.

“We’ll get there,” she said. “The more people see how far we’ve come in such a short time, the more businesses, like Jody’s brother’s company, step forward … we’ll get this built.”

Donations can be made to Taylor Splash Park and sent to Taylor Borough, 122 Union St., Taylor, Pa. 18517 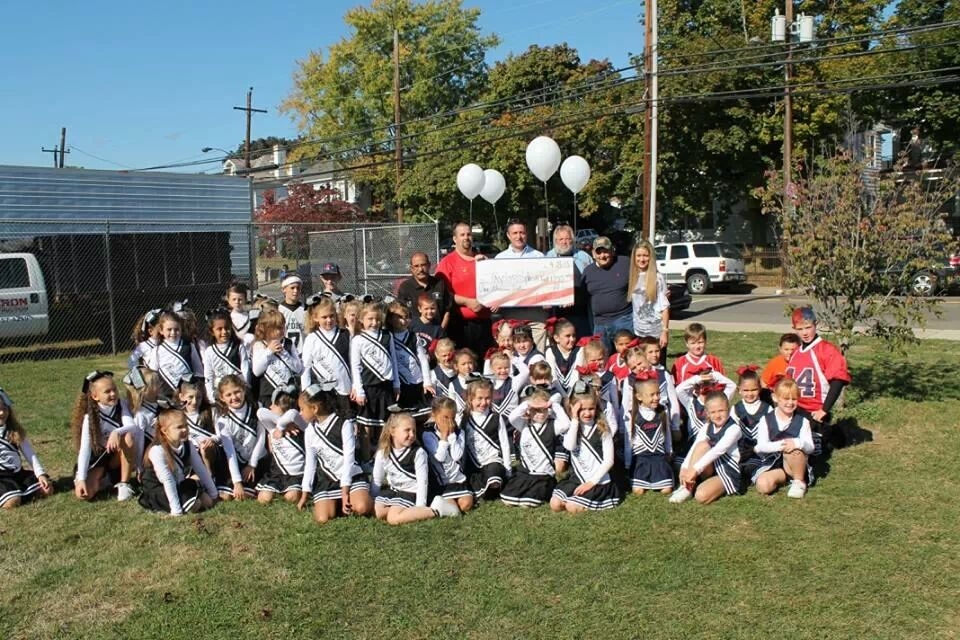 Splashing into Something New

What started out as a simple “what if” as one Taylor resident watched her three small grandchildren splashing about on hot summer day, has turned into something much bigger for the borough of Taylor.

With a $275,000 estimated total cost and the dedication of around 14 people, the Taylor Borough Splash Park Committee is off and running, hoping to earn enough funds to cover the costs it needs to be operational by 2017.

The splash park will be built at Derenick Park off of Union Street and will feature several water-based activities for children from throughout the Triboro-area, not just those living in Taylor.

“The closest splash park is in the Abington area and with our central location it makes sense and is a good opportunity to bring people into our community,” said Taylor Borough’s Recreation Director Chuck McKeel. “This is something for those who don’t play sports to do.”

The idea for a splash park in Taylor was the brainchild of Peg and Buddy Derenick.

“They came to the recreation committee and shared their ideas,” McKeel said.

“It takes a lot of work and I knew this was something that I couldn’t do myself,” said Peg Derenick. “My husband and I have three grandchildren and we take them to other splash parks.”

“He spent 20 years of his life building that field in the memory of his dad,” she said. “We’ve been working fast and furious because he’s been feeling better after having been ill. And now we have a committee together and the things that can happen because of this park are limitless and people are seeing this. It’s not just limited to Taylor children, it’s for the whole area. It’s a win-win situation for Taylor Borough and the whole area.”

Derenick said that enthusiasm is growing and that everyone who learns about the splash park wants to help generate funds for it.

“Even if we fall short of raising what we need for the matching grant, I am confident we will be able to still see this splash park built at Derenick Park,” she said. “I am very confident this is going to happen.

“It’s not going to be that huge, but it will be a place where children will be able to go and play and cool off in the hot summer months,” McKeel said.

He explained that maintenance and operational costs are anticipated to be minimal for the park once it is operational. For now, the focus is on generating the funds to get the project started.

“Right now, the committee is conducting a daily number fundraiser for the month of March,” he explained. “Tickets are available for $5 and are good for the entire month.”

Additionally, the group has teamed up with the Easter Bunny, who will be hopping by the Taylor Hose Co. No. 1 on Union Street from 9 a.m. to noon on Sunday, March 16.

Tickets for the breakfast are $7 for adults and $5 for children and on sale now and available by calling 562-3680. Tickets may also be purchased at the door.

The splash park committee meets monthly, with the next meeting at 7 p.m. on Monday, March 4, at Riverside Elementary West, 308 Davis Street, Taylor