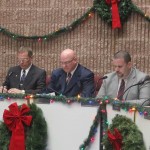 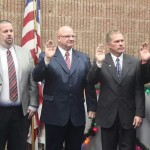 Councilman James Digwood resides on Center Street with his wife of 45 years JoAnne Fahey Digwood. Joanne has been employed by the Riverside Rehabilitation and Nursing Center for more than 30 years. They are the parents of two sons Daniel, a social studies teacher and Athletic Director in the Riverside School District along with his wife Caitlin and their sons Cooper & Tanner and Darrell and wife Sandy, Darrell is the Program Director at TCC. All reside in Taylor Borough.

Mr. Digwood has been recognized at the state level receiving numerous awards from the Pennsylvania State Association of Borough’s including the Leberknight, Chrostwaite and Sambol Award for my years of service. The PSAB also honored Mr. Digwood with the Distinguished Service Award which recognizes outstanding public service. Mr. Digwood also received the distinction of having attained the credentials of Certified Borough Official (CBO).